This Leek Tart with Za’atar Crust is filled with creamy hummus and surrounded by a gluten free crust. It is an easy recipe that is sure to impress. 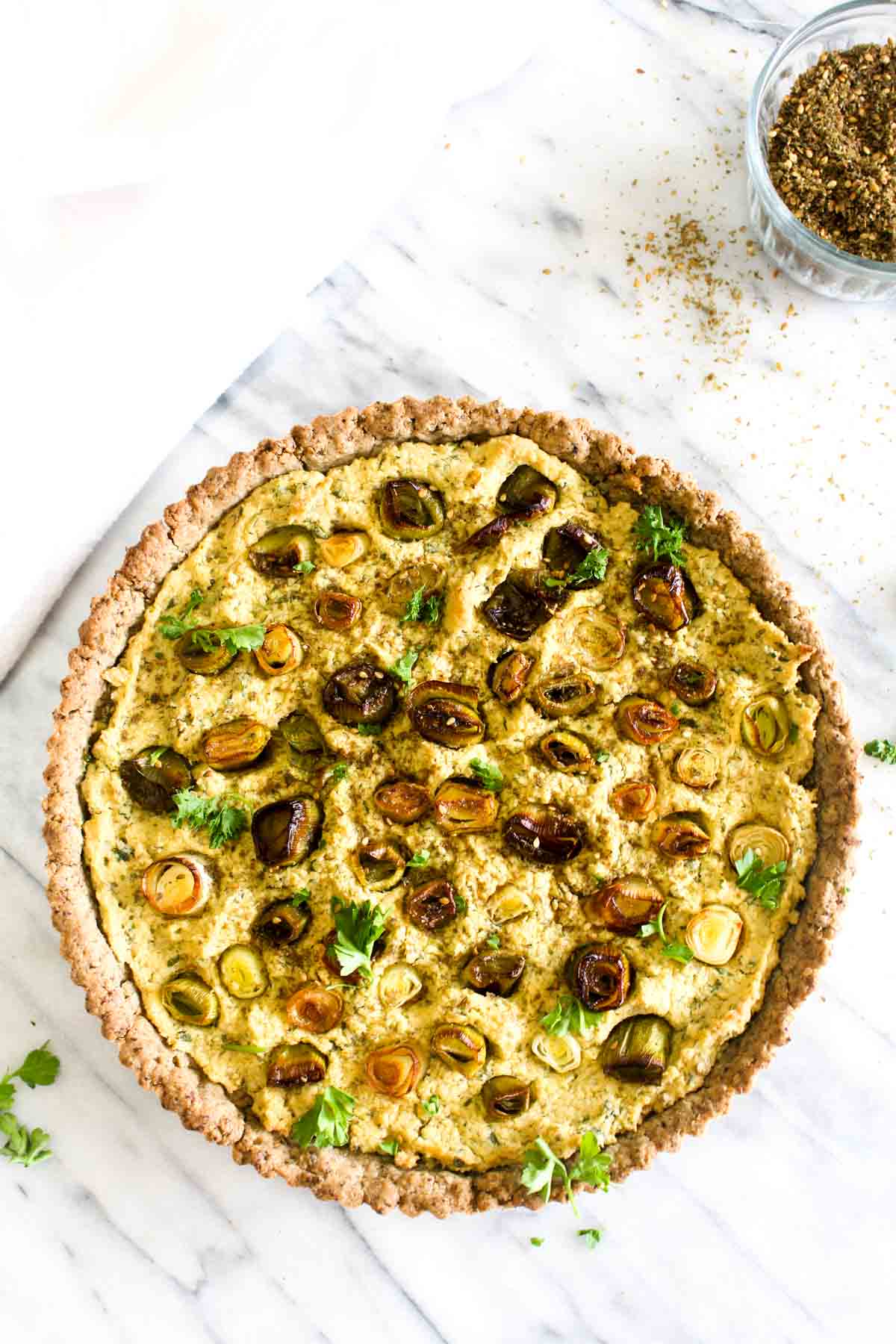 Don’t be intimidated by the dough.

I get it. You might be the chef de cuisine in your household, you know your way around any kitchen, and you are not only the boss of weeknight dinner, but Saturday dinner party? You’ve got it in the bag.

BUT, crust dough of any kind is still intimidating. I am right there with you. Until I found this recipe.

This tart dough is so simple and easy that anyone can do it. And don’t let the fancy za’atar fool you. It might sound intimidating, but trust me, all you have to do is crumble the dough into the pan and then press it down. Easy enough? I think so! Leek Tart with Za’atar Crust here we come! 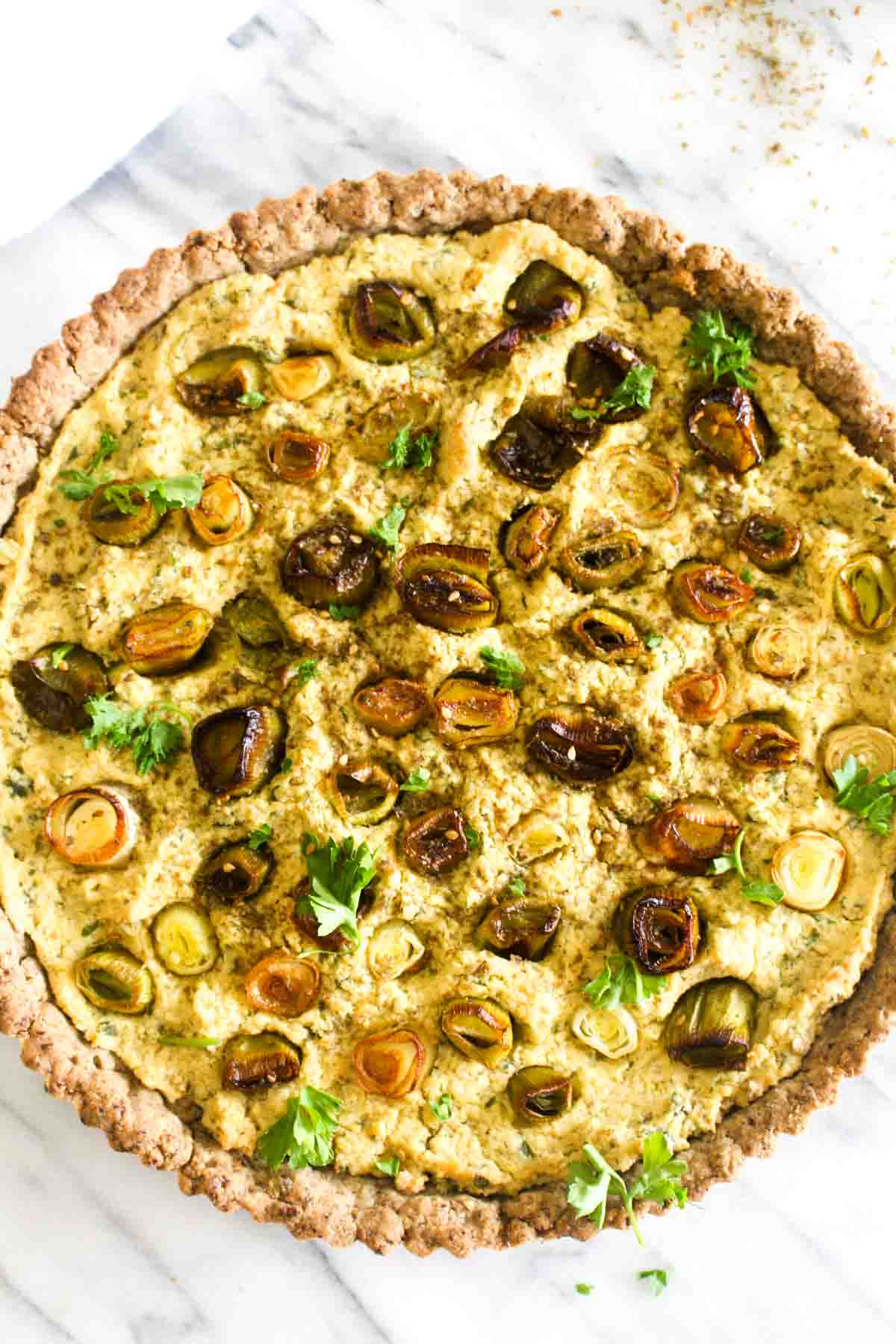 The za’atar seasoning is the secret ingredient to give this crust mega flavor. It is a middle eastern herb blend that is comprised of thyme, toasted sesame seeds, sumac, and salt. It gives the crust a fresh, herby, and nutty flavor all at once without being overpowering. This stuff can be tricky to find in some stores, so I usually buy mine on Amazon

and have it on my doorstep in a matter of days. Thank you 21st century! 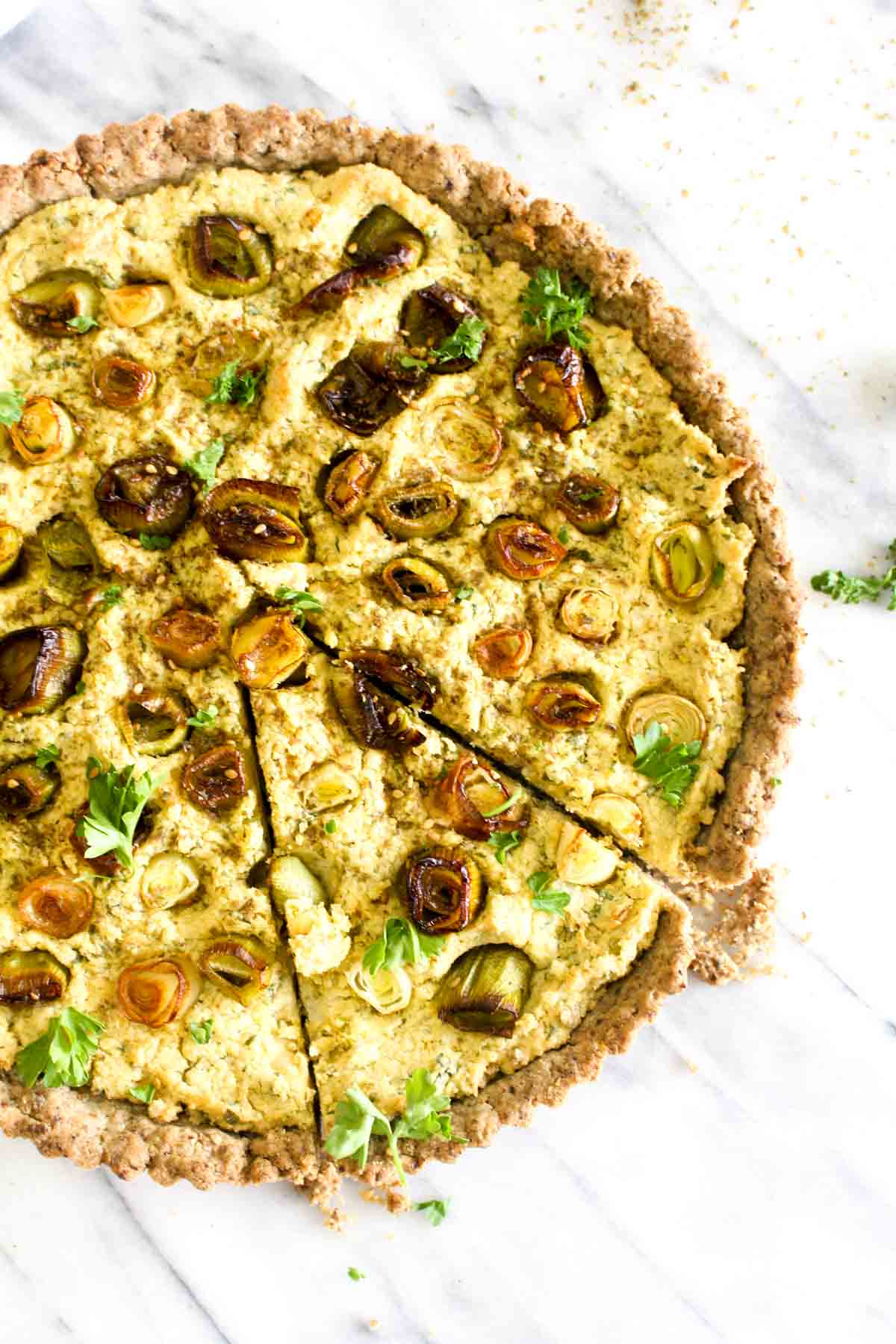 This flavorful and flakey crust has more to do than just taste good. It surrounds our creamy filling – and this filling is as easy as it gets. All you need is some plain hummus, a couple a cloves of garlic, and some fresh parsley.

Then, caramelized leeks stud the top of this Leek Tart with Za’atar Crust. These leeks came straight out of my aunt’s garden. Did you know that leeks can survive the winter?!?! I barely make it through the sub zero temps and I was bundled up in a down jacket with a mug of hot cocoa in my hand at all times. These resilient plants lived under a couple feet of snow for FOUR MONTHS and came out looking good as ever! Plants, man. They are SO cool! 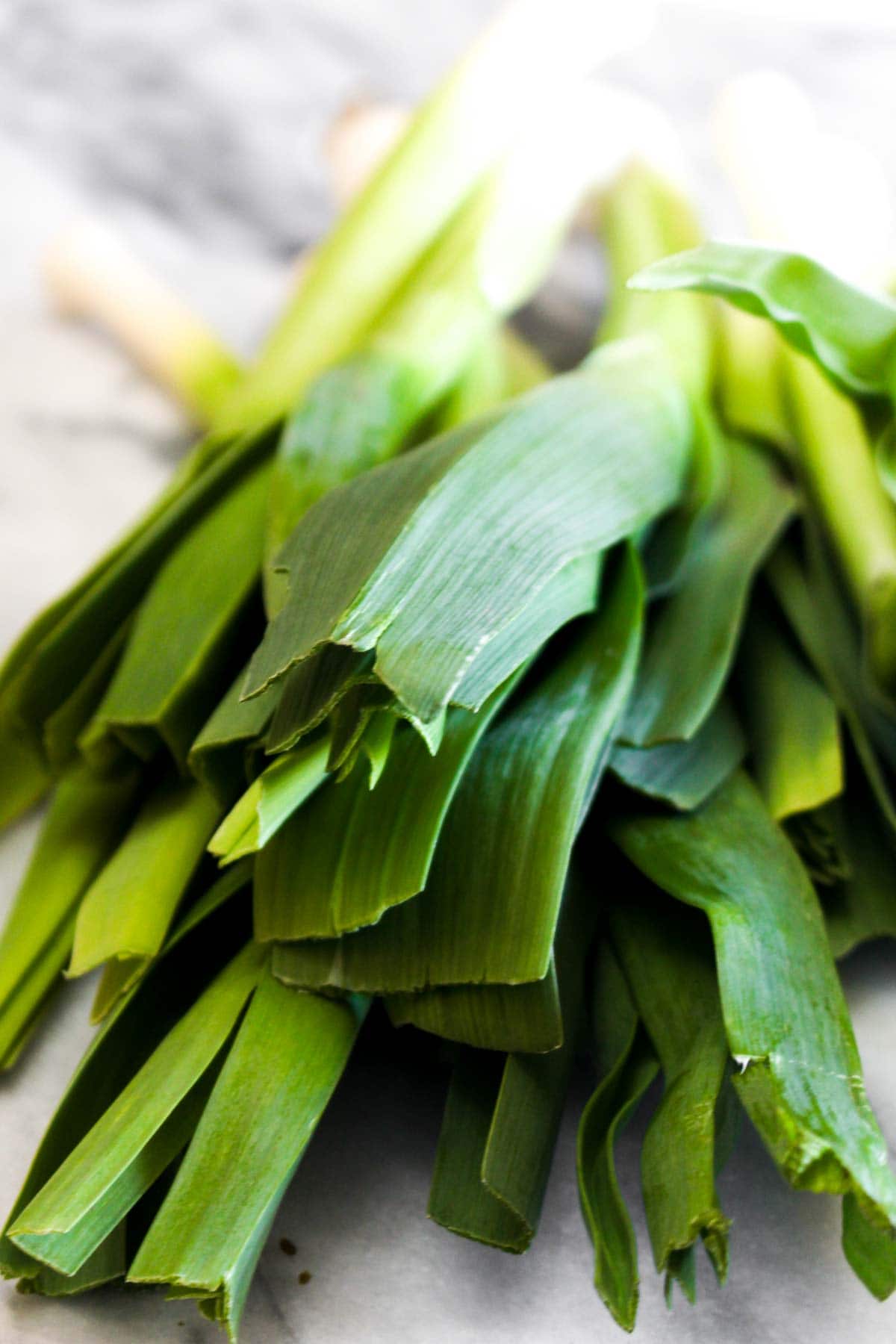 It might sound unorthodox, but I will be making this Leek Tart with Za’atar Crust for Mother’s Day. No question about it. Thought you might not think of this as Mother’s Day fair, it makes a great addition to the brunch table. Pair this with some roasted breakfast potatoes, a side of fruit and a brunch cocktail and life is GOOD. 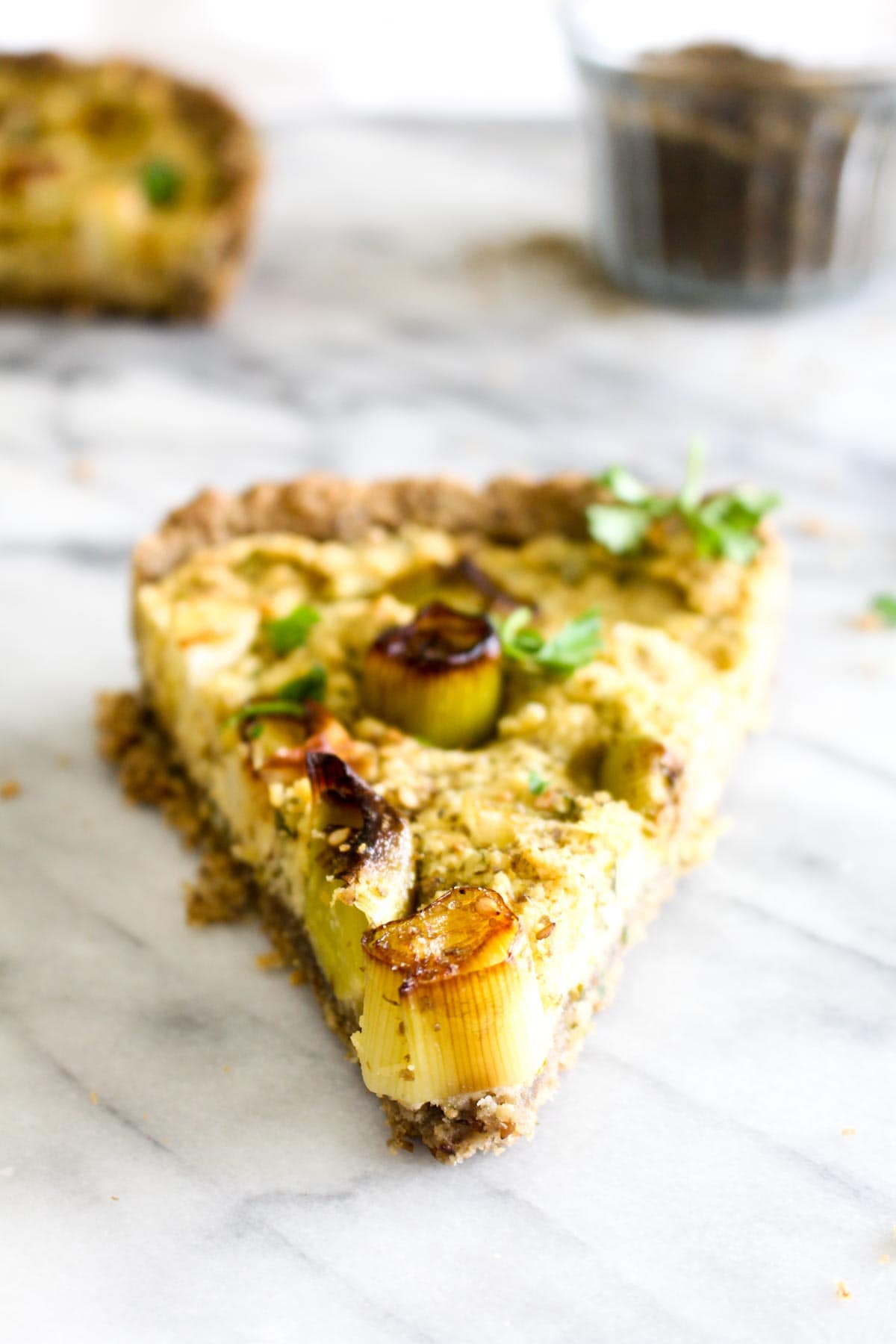 Let me at those spring leeks!

This Leek Tart with Za’atar Crust is filled with creamy hummus and surrounded by a gluten free crust. It is an easy recipe that is sure to impress.

If you try and cut the tart before it has cooled to room temperature, it will crumble and break into pieces. Once it has cooled it is much easier to slice.