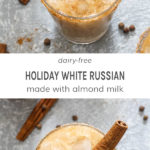 This Almond Spiced White Russian recipe is a fun holiday twist on the traditional cocktail! For a dairy free drink, almond milk gets steeped with spices like cinnamon and nutmeg to infuse this beverage with flavor. 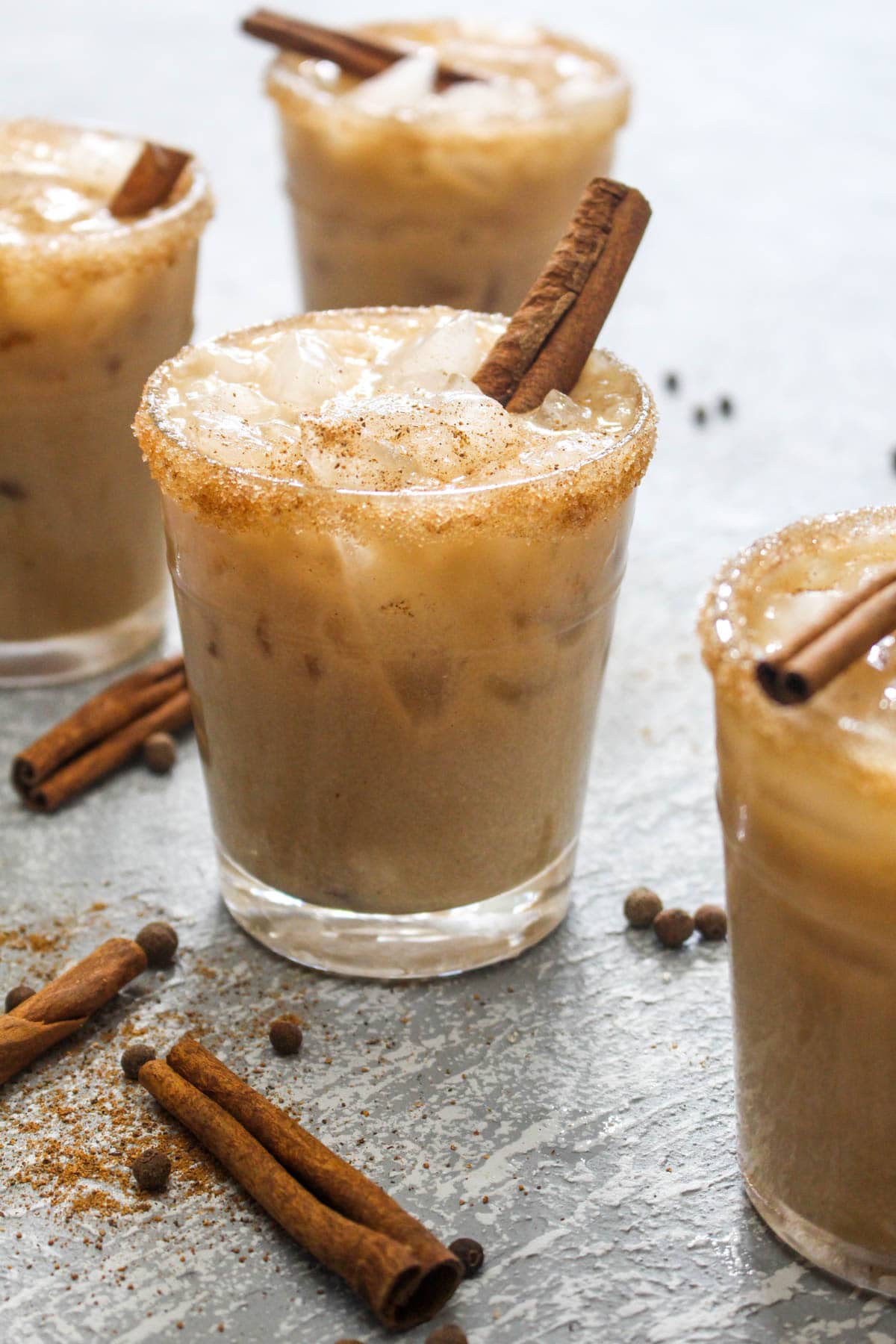 If there was an official cocktail of the Cornwell family (that's me!) it would be a White Russian.

Every Holiday season the Kahlua and cream are flowing. Despite this being a very nontraditional Christmas or New Years drink, that has never held us back. In our tribe its a White Russian or you're out.

I think the tradition started with my grandma. She pioneered this peculiar cocktail choice and now that she is gone, we still hold true to the trend she set. 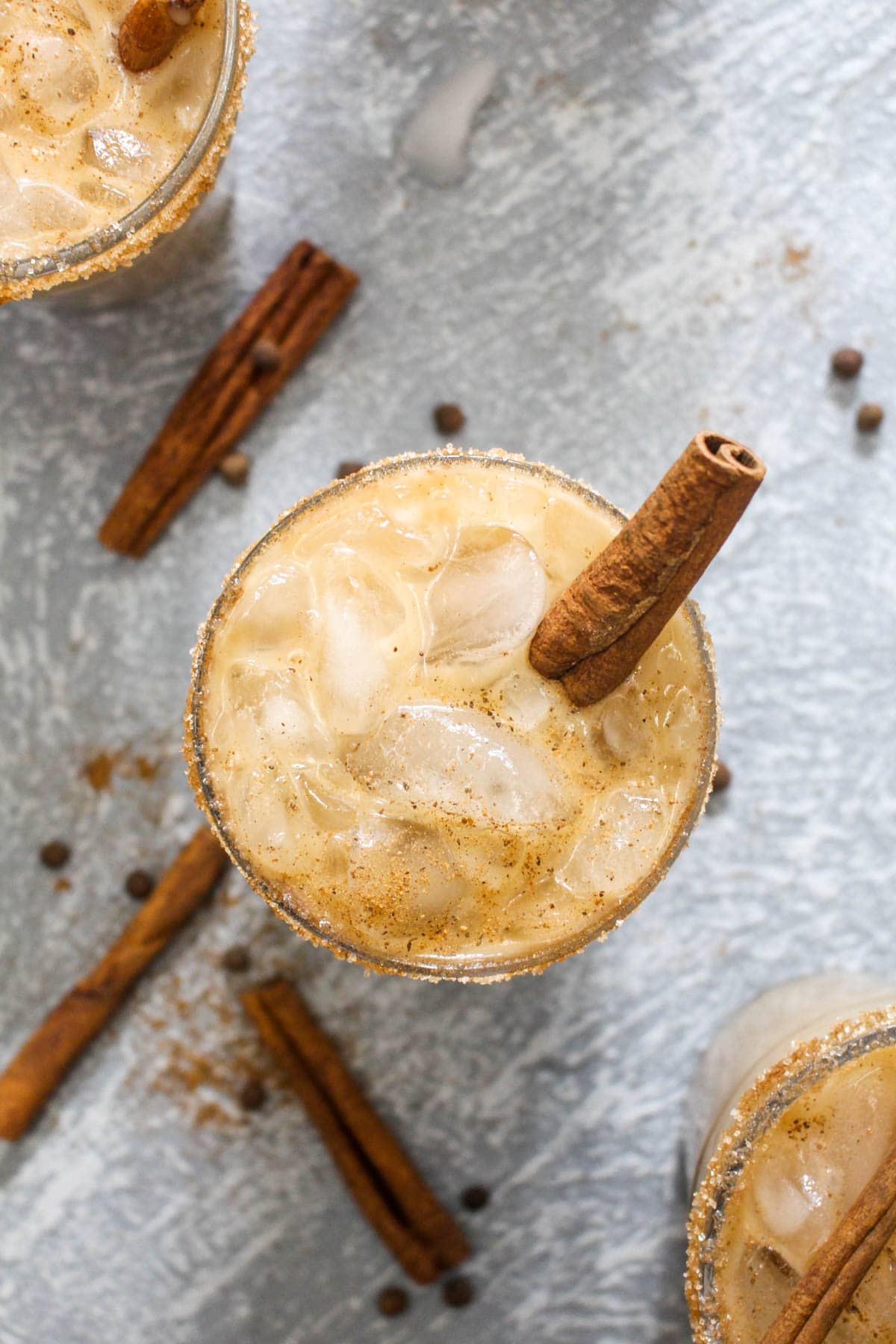 As loyal Cornwells, all my cousins and I started sipping on White Russians as soon as we turned 21. Then all around the same time 5 of us found out we had a severe dairy allergy. We could live without milk. Butter was fine too, but the cream added to our Kahlua... the most tragic of all.

Then my cousin, the genius that she is, started pouring her drinks with almond milk instead of cream. Now, this was before almond milk was cool. It hadn't yet taken over the dairy case and this was a coveted jar of crunchy homemade almond milk.

From that moment on, we were back in the saddle. Nothing, not even dairy, would hold us back from our Cornwell clan cocktail. 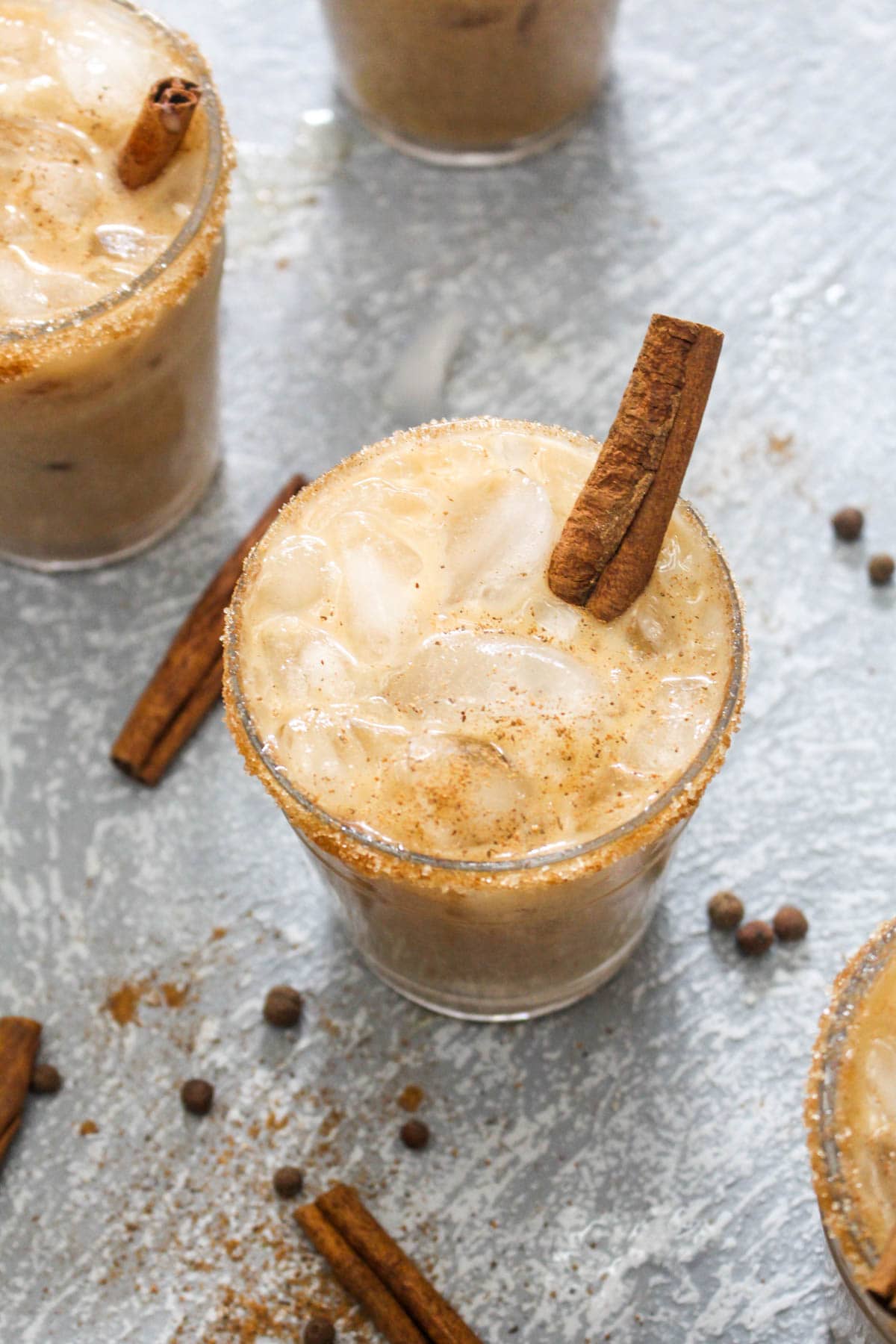 This year, I upped the ante and made this Almond Spiced White Russian. Warm spices like cinnamon, allspice, and nutmeg, take this cocktail into holiday territory.

Instead of using cream or plain almond milk, we heat some unsweetened almond milk on the stove until it simmers. Then we remove it, toss in some spices and maple syrup, get the lid on the pot, and let it infuse. This 20 minute trick is what makes our Almond Spiced White Russian drinks over the top.

Another strangity of my families cocktail choice was we never added the vodka. Heavy on the Kahlua with a splash of cream and our drinks were ready to be served. To make this a proper Almond Spiced White Russian, we add in a shot of vodka to each drink.

What do you put on the rim of a White Russian?

Ahhh.... that cinnamon sugar rim. It's not technically necessary, but boy does it make these Almond Spiced White Russian look and feel festive. The sparkling sugar and the warm cinnamon coating the rim takes these drinks into party territory, and plus, you get a nice sweet cinnamon hit each time you take a sip.

This Almond Spiced White Russian recipe is a fun holiday twist on the traditional cocktail! For a dairy free drink, almond milk gets steeped with spices like cinnamon and nutmeg to infuse this beverage with flavor.