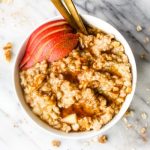 This Spiced Pear Oatmeal tastes like being wrapped up in a cozy blanket while sitting in your favorite oversized chair in front of a glowing fireplace.

It also tastes like sweet pears, sticky maple syrup, crunchy walnuts, and warm cinnamon. We're getting the picture. This is all the best flavors of Fall in one comforting breakfast bowl.

Reasons to love this recipe!

How to make pear oatmeal:

Cook the oatmeal: Bring the water and milk to a simmer in a pot. Stir in the oats and salt. Cook until the oats are tender and creamy.

Add the pears: Remove the pot from the heat. stir in the pears, walnuts, maple and cinnamon. Cover, and let it sit for 1 minute to soften the pears.

Serve: Top the oatmeal with more walnuts, maple, and cinnamon.

This pear oatmeal recipe is great as leftovers! Store leftovers in a lidded container in the fridge for 5 days.

To reheat, stir in a splash of milk and warm on the store, stirring often, or in the microwave until warmed through.

When oats cool, they thicken so the extra splash of milk will help get then back to their original consistancy and reheat evenly.

How to make creamy oatmeal?

This pear oatmeal is ultra creamy. The secret? Using half water and half milk. It creates the perfect bowl of oats. I used soy milk, but you can use any milk you prefer.

If you're using a thinner milk, like almond milk or 1% milk, consider using more milk and less water to achieve a creamy oatmeal.

Milk: I used soy milk, but any milk you like would work. Almond, coconut, 2%, etc. If you're using a thinner milk, like almond milk or 1% milk, consider using more milk and less water to achieve a creamy oatmeal.